As one of the leading Western or Cowboy Art creators, Frederic Remington is often credited, among his peers, as being instrumental for the construction of the cowboy persona and aesthetic such as we now know it. While photographic evidence shows that the men who worked with cattle in the far reaches of the American West were a rather diverse breed, what stuck to the popular imagination were the depictions produced by men like Remington. Interestingly enough, most of those men were urbanites, with a restricted and often distanced view of the cowboys, which led them to build this idealized antithesis of the average city dweller. It has even been posited that the rise to prominence of the cowboy style and aesthetic in the early 20th century was part of a response to the United States changing from a mostly rural nation into an increasingly industrialized and urban country.

Being so, it would be expected that there be more than mere aesthetic aspects to the genre. Playing into that, Remington and his peers often depicted their subject matter in situations of life-threatening peril, making them up to be bastions of humankind against nature and its dangers. This is not to say that the real men did not go through such situations, but instead that the choice of what to depict was part of the Western Art discourse. In this 1908 oil on canvas, currently stored in possession of the Thomas Gilcrease Institute of American History and Art, in Tulsa, Oklahoma, Remington brings to life one such perilous situation: a group of rain-drenched cowboys riding blind in the middle of a storm trying to reach the front of a stampeding herd in hopes of heading off the leaders and stop the cattle from being lost.

On this piece, Remington wrote in his diary that he was rather pleased with the way he was able to capture the yellow glow of the storm, making his nocturne piece a success. Concurrently, he also exposed his rationale for the choice of subject matter, writing that he could think of nothing more desperate than riding blind among the stampeding longhorns. That thinking gives us a window into his motivations, demonstrating that it was indeed his objective to portray the cowboy as the daredevil he would be imagined as for generations, a stoic yet wild man that cares little for his own life as long as the job gets done.

If you have any request to alter your reproduction of The Stampede, you must email us after placing your order and we'll have an artist contact you. If you have another image of The Stampede that you would like the artist to work from, please include it as an attachment. Otherwise, we will reproduce the above image for you exactly as it is. 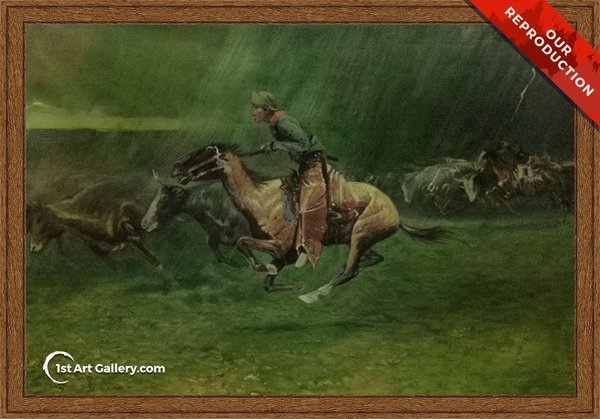 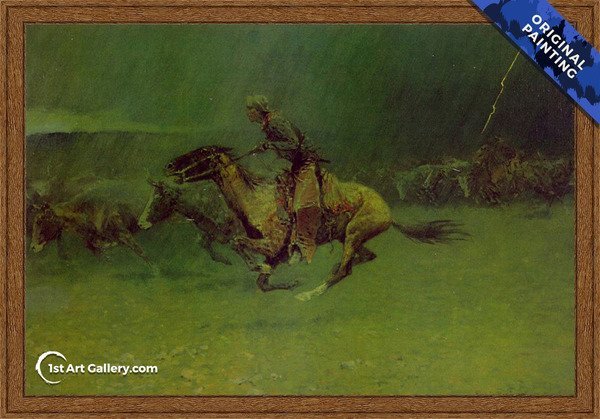